As holder of the label Centre Chorégraphique National, the CCN – Ballet de Lorraine is a mandated supporter of professional choreographic companies, and actively participates in the renewal and the evolution of the contemporary dance sector. For that, one specific program has been created by the Ministère de la Culture (French Ministry of Culture and Arts) in 1998 : the accueil-studio.
This publicly funded program allows a Centre Chorégraphique National to host a professional company for a paid residency, and to accompany them financially for an upcoming creation. Between 4 and 6 dance companies (regional, national or international) are hosted for residencies at CCN – Ballet de Lorraine every season. These residencies often are an opportunity for the company to give public rehearsals in our studios, or to give workshops open to everyone. 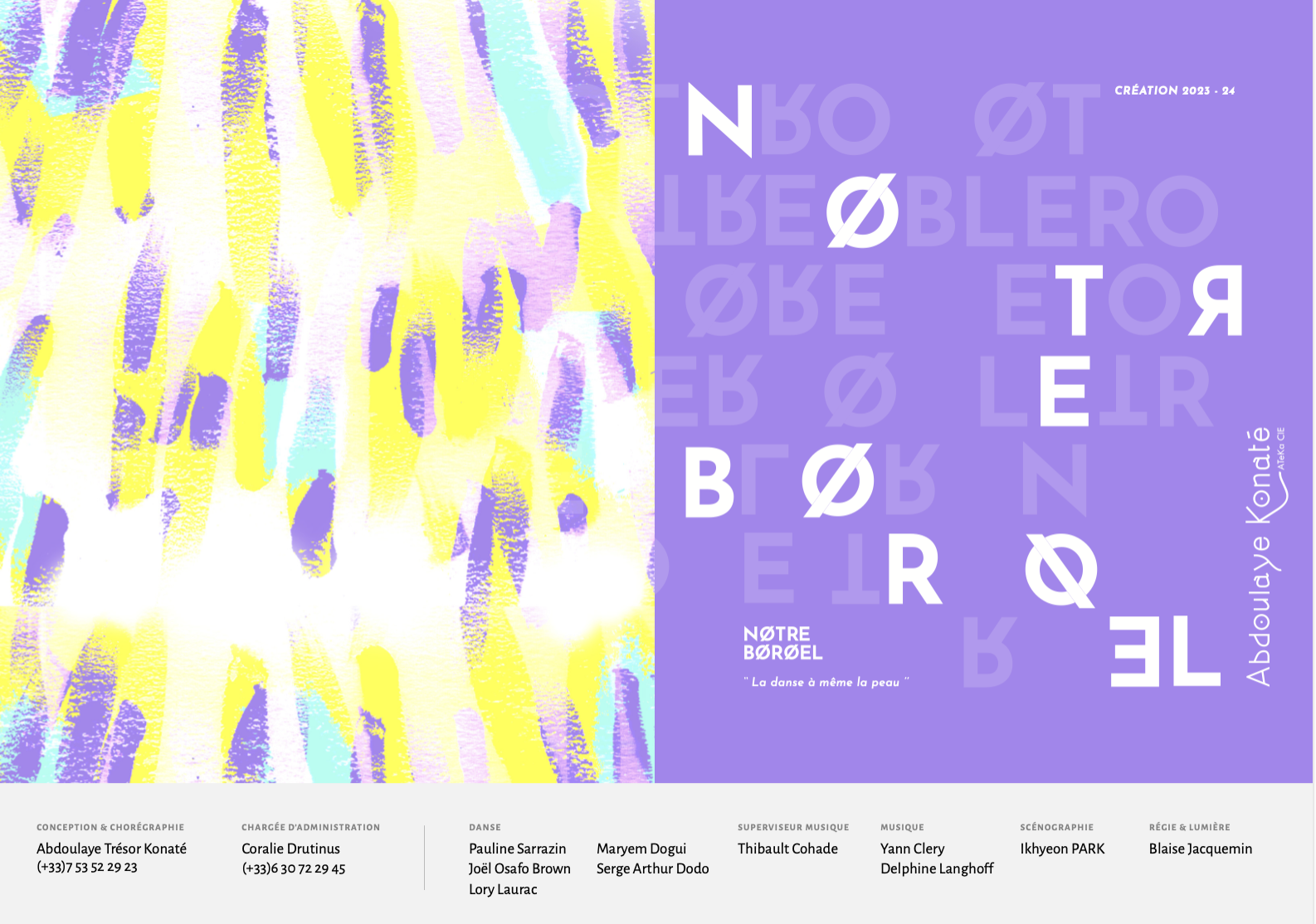 “The instant, then the instant after that, shapes time. Two measures. Time as a measure of a rehearsal in space, like what Maurice Ravel did with his Boléro, is the first landmark – and it all goes on from there.

Here a lullaby from our childhood, sung the way an African mother would repeat it with a monochord accompaniment -- becomes the time signature for Bolero ? [NØTRE BØRØEL] [Our Bolero] – at the same tempo as the progression established by Ravel with an imperceptibly different tone, which we will call “staggered.”
It is quite possible to hear it differently when I hear the version in Fon (a language of Bénin) by the wonderful African singer Angélique Kidjo, or the dance of Boloye (an Ivory Coast dance, a “dance of the panther men”) danced by insiders from the Senufo people of West Africa.

Using this “staggered” approach to the original melody which is constantly curling around and inside itself, we intend to use it to support the body in its unique yet multiple presence, driven by the creative impulse from which realities, vibrant, varied, contradictory and contrasting emerge, proving their allegiance to our universal humankind.

I based my analysis on the five parameters of Ravel’s original music: the time signature, the rhythm, the melody, the modulation and the ritornello (the repeating figure in the music, both simple and abstract) – and per a danced musical étude, I gave one dancer the time signature, another the rhythm, the third got the melody, the fourth the modulation, and the last dancer took on the ritornello.

The concept of ritornello is an essential part of African music, so I decided to look at traditional music from my country – more precisely from Korhogo, a city in the northern Ivory Coast – establishing a tight connection with those from the bushinengue (a group of Afro-
Surinamese people who managed to escape slavery) in St. Laurent du Maroni in Guyana. The intent was to rock, to cradle, while also awakening – according to something once said by Isadora Duncan : “Dance next to the skin.”

The driving force of Notre Boléro is this “ force creating unpredictably shapes which are more and more complex,” which are polymorphic. 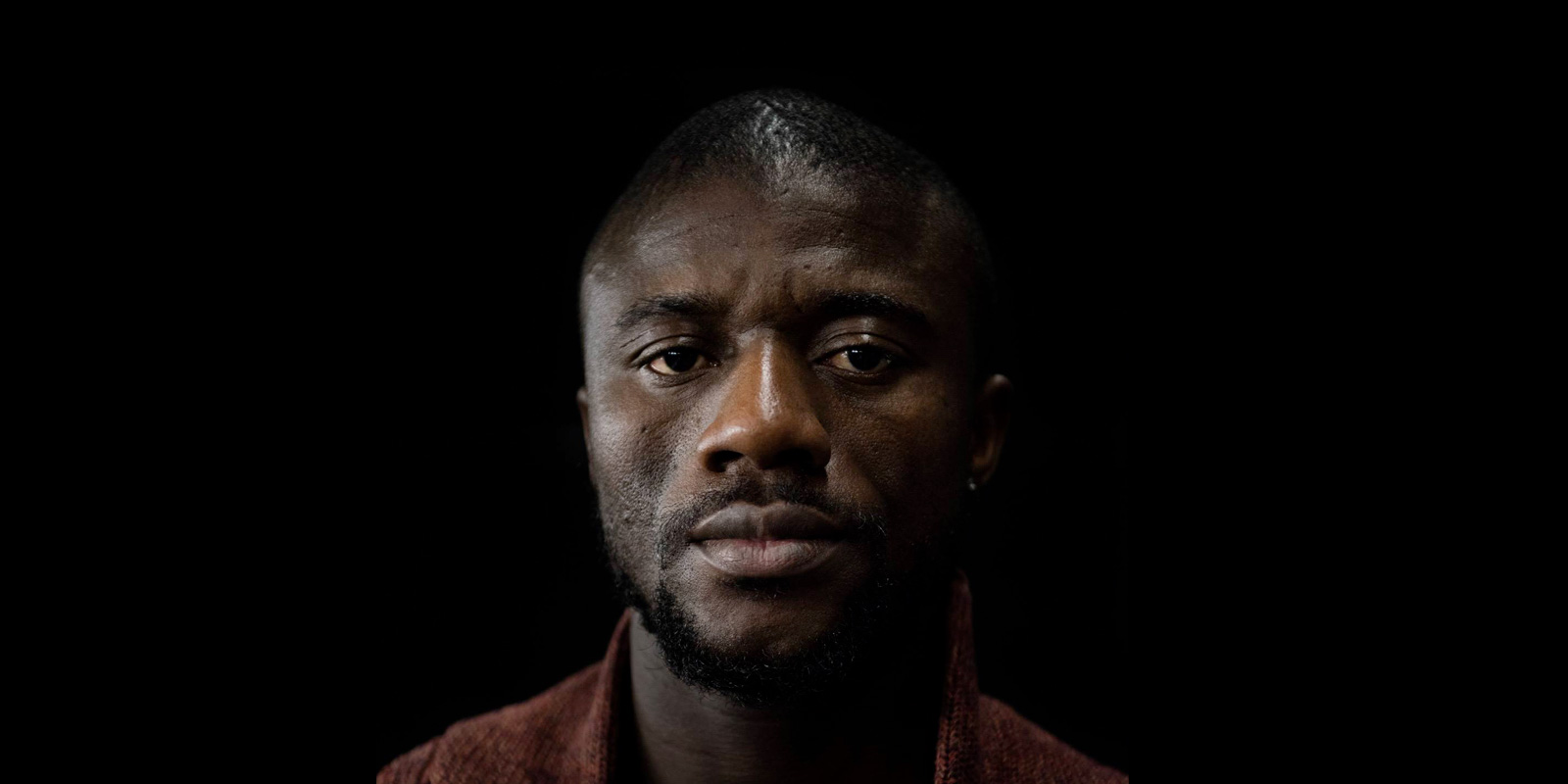 “Cradled since childhood by the rhythms and songs of my native region in the Ivory Coast, as a young teen of 14, I left my family home and began to encounter urban and traditional dances. I earned a CAP as an autobody mechanic, which allowed me to at least earn a sort of living.
However at the age of 22 I decided to go for it, to become a dancer, then to be a choreographer. My childhood dream, to become a doctor did not happen, but I retain a
connection to this vocation in that I hope to contribute to the community by healing others. Dance is for me not only a formidable social tool, but also an art form which I chose for its ability to create joy in the body and the soul, its potential for revealing the inexpressible and freeing the body from constraints.
From 2004 to 2011, I began dancing professionally, with, among others Cie Klozai, Cie Djiguiya, Cie Georges Momboye, and Kamel Ouali for the Panaf 2009 in Algiers. During this time, already interested in communication and teaching, I trained nearly 300 dancers from the Cebafrica troupe in the Ivory Coast.
I continued working on my own research and founded my company, Jasp, in 2008, which toured to many different countries in Africa: Ivory Coast, Bénin, Burkina Faso, Algeria and France. I met a number of important artists, notably Mathilde Monnier, Salia Sanou and Seydou Boro in 2004 at the Dialogues of Bodies Festival. I was also influenced by the pedagogy of Pierre Doussaint and Koffi Koko with whom I studied intensively the dances of Bénin when I was exiled there from 2011- 2013. Living in France since 2013, I danced with various artists, among them: Bernardo Montet, O’ More, Alfred Alerte (2017), and Christiane Emmanuelle (2021). When they came to Strasbourg, I continued working with artists such as Steven Cohen (performance), Sylvain Huc (contemporary dance) and Sherwood Chen (Bodyweather).”

Applications for the accueil-studio program between January and June 2024 is closed. We thank the artists and companies who have sought our support. We will get back to them soon to inform them of our decision.

To participate in the accueil-studio program between July and December 2024, please send material via email before July 7, 2023.

Material will consist of:

- 1 company dossier and a document about the creation for which you are requesting support,
- a budget plan,
- a rehearsal schedule, a creative timeline, touring proposals,
- and internet links to videos of your most recent works and photos.